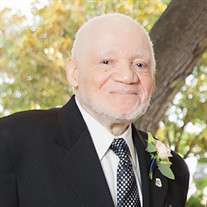 Willie Nelson, Jr, a former resident of this city of New Orleans for many years, died peacefully at his home in Arlington, Texas on Friday, February 4, 2022, at the age of 94. He and his family moved to Arlington Texas in 2005 after the Hurricane Katrina crises. Willie was born June 29, 1927, to the late Willie Sr. and Bessie Reese Nelson of New Orleans, Louisiana. He attended McDonogh #6 Elementary School for his early childhood education. Willie went to Booker T. Washington High School where he developed an interest in printing. After graduation, Willie was drafted into the U.S Military and served in the Air Force during World War II. Following his tenure in the Air Force, Willie chose Southern University in Baton Rouge, Louisiana to pursue his higher education. He continued his studies in printing and graphic arts with a focus in Offset Printing which led to a career in newspaper production. When called, he worked for Edinburgh, Moret and Paramount Printing Companies. Willie Nelson married Barbara Elizabeth Blackwell in 1951. They produced four children: Michael, Karen, Karla, and Willie III. In the early fifties Willie worked at the Johnson Publishing Company as its uptown Circulation Manager, assisting in the delivery of Ebony and Jet Magazines for the New Orleans area including the Westbank. In 1954, Willie left the Johnson Publishing Company to join The Louisiana Weekly Newspaper, Publishers of the oldest black newspaper in the state, where he accepted the position of the uptown Circulation Manager. A year later, The Weekly began printing its own newspaper using the Offset Printing style, and Willie was transferred to the Production Department as its manager. Willie, along with the editor, did the make-up and layout of each page in The Louisiana Weekly Newspaper for nineteen years. Quoting him “I put the paper to bed.” During his years at The Weekly, Willie became interested in Advertising Sales. He went with The Weekly’s Sales Account Executive to meet his clients who had large and small businesses in the city. This was a valuable training experience for him. In 1973, he left The Weekly to become the first African American to work as an Account Executive in the Advertising Department at The Times Picayune Publishing Company (Publishers of The Daily Newspaper). He retired from this position in 1989. His childhood religious upbringing was at Payne AME Church. He then joined Peck United Methodist Church where he sang in the young adult choir and became a member of the United Methodist Men Organization. After moving into Pontchartrain Park, he joined Bethany United Methodist Church. He became an active member of the church serving as an Usher and continued his membership in the United Methodist Men Organization. In 1977, Willie and Barbara and their family moved to their new home in New Orleans East. When Cornerstone United Methodist Church opened its doors in 1989, they worshipped at the church on numerous occasions and pledged their membership at the Holy Thursday Worship Services. It was at Cornerstone that Willie spread his wings for the Lord. He served on many committees within the church…Usher, Food Bank, Out-Reach Ministry, Facility Improvement/Beautification and as Chairperson of the Board of Trustees in addition to others. The United Methodist Men of Cornerstone selected Willie as “Man of the Year” in 1999 for his contribution towards their organization’s objectives. Willie received multiple awards and recognition for his services in the church as he was affectionally nicknamed “Mr. Cornerstone”. Willie was a member of the Young Men Illinois Carnival Club. This prominent club introduced debutantes to society in New Orleans. He was also a member of The Noble Men’s civic and social club. Willie was honored at the Dryades Street Young Men Christian Association (YMCA) for his leadership in their mentoring program. He also volunteered at assisting political candidates seeking positions in his district as well as city-wide. Willie was a jubilant person who was a sharp dresser. Never could he ever sit still when there was something to do or something to be completed. He had an outgoing personality, loved to dance and never met a stranger. As an avid gardener, nothing pleased him more than the maintenance of his garden or giving tips on your garden or yard. Willie loved life and had a zest for living. He was definitely a part of the social scene in the Crescent City…Carnival Balls, Concerts, Saints Football Games, New Orleans Jazz Fest and other community events. Willie enjoyed the moments he shared with his grandchildren and they loved him. He was so excited and happy over the birth of his sixth great-grandchild three months ago. Family gatherings and socializing with his friends and neighbors added to his longevity. Looking back, Willie said, “The road up was challenging but I mastered it, and I never let the failures stop me from going up the ladder.” Willie was preceded in death by his parents, Willie and Bessie Reese Nelson Sr., and his sister, Jean Price Cain. He is survived by his loving wife of 70 years, Barbara Blackwell Nelson and his four children, Michael Reese Nelson, Karen N. (Ronald) Hill, Karla N. (Marvin) Forrest, and Willie Nelson, III; Eight grandchildren, Nicole P. (Darren) Clark, Ronald A. (Dominique) Hill, II, Karen N. Davis, Reva K. Forrest, Rayven T. Forrest, Kasey N. Davis, Rachael E. (Isiah) Reed, and Kolby N. Davis; Six great grandchildren, Cadence E. Reed, Ronald/Tre A. Hill, III, Delanie L. Clark, Ryan C. Hill, Carter E. Reed, and Cameron M. Reed; Nephews, Shelton N.(Rosalind) Price, Eugene J. (Jennifer) Green, Jr, Kevin E. (Monique) Green, and Terence A. (Roxanne) Green and Steven Yearby; Nieces, Janelle A. Green, Terri P.(Vernon) Braud, Robbin L. Irvin, Marcella R. Cain, Elizabeth C. (Terry) Milligan and his adopted church daughter, Veoletta Green. Relatives and friends of the family are invited to attend a Funeral Service at Cornerstone United Methodist Church, 5276 Bullard Avenue on Saturday, February 19, 2022 at 11:00 am. Visitation will begin at 10:00 am. Interment: Mount Olivet Cemetery. Arrangements by D.W. Rhodes Funeral Home, 3933 Washington Avenue. Please visit www.rhodesfuneral.com to sign the guestbook.

Willie Nelson, Jr, a former resident of this city of New Orleans for many years, died peacefully at his home in Arlington, Texas on Friday, February 4, 2022, at the age of 94. He and his family moved to Arlington Texas in 2005 after the Hurricane... View Obituary & Service Information

The family of Willie Nelson Jr created this Life Tributes page to make it easy to share your memories.

Willie Nelson, Jr, a former resident of this city of New Orleans...

Send flowers to the Nelson family.