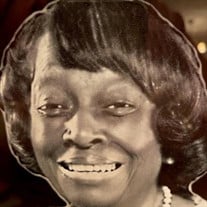 Rhea Butler Lucien, loving daughter, sister, widow, retired registered nurse and school teacher, aunt, godmother, AKA soror, neighbor, friend and centenarian, passed away peacefully on Thursday, December 2, 2021, at 9:02 PM, at Ochsner Hospital in Jefferson, LA, following a brief hospital stay and illness. Having recently celebrated her 100th birthday, the daughter of the late Samuel Butler and Sarah Irving Butler, was the baby of ten siblings, who was born in New Orleans, LA on October 3, 1921. Although she grew up during the great depression, Mrs. Lucien recalled in a recent interview that she didn’t even know that they (her family) were poor. Despite a caste system that would separate her by skin color, race and gender, she was a world traveler who traveled five continents and lived in Cleveland, Ohio, Washington, DC, Chicago, Illinois, Montreal Canada and New Orleans, LA. Her formative years were spent in New Orleans, where she was educated in the New Orleans Public Schools, having attended and graduated from Valena C. Jones Elementary, Albert Wicker Junior High and McDonogh 35 High School. She and her husband-tobe studied at Dillard University and graduated with a Bachelor of Science degree in nursing in May of 1945. Although her aspirations at the time were to become a medical doctor, the Jim Crow laws of the South and costs were prohibitive for her and her family to afford. Mrs. Lucien nonetheless, enrolled in and graduated with a Master of Science degree in nursing from Case Western Reserve University in Cleveland, Ohio, and received 30 “+” graduate hours beyond the Master’s degree from Catholic University, in Washington, D.C. Following her nursing studies, Mrs. Lucien worked as a registered nurse in Flint-Goodridge Hospital, the New Orleans Public Health Hospital, the Calliope Project in New Orleans, the Cook County Projects in Chicago, Illinois, the Veterans’ Administration Hospital in Tuskegee, Alabama, New Orleans and the Victorian Order of Nurses and the Jewish General Hospital in Montreal, Canada. A true “Bleu Devil”, Mrs. Lucien also taught courses in the nursing program at her alma mater, Dillard University. The consummate lover of education, Mrs. Lucien, feeling burnout from the drain of bedside nursing, decided to use her God-given gifts to teach. It was then that she re-enrolled in school and became a certified school teacher. She taught as a classroom teacher at Harney School and served as a teacher to homebound school-aged children throughout the city. Mrs. Lucien stopped short of declaring just how many years she worked. Although for those of us who knew her, the truth is she never really stopped working! A quiet, gentle and humble woman, Mrs. Lucien treated all with dignity and respect. She is survived by four nieces, Juliet Tinson Robertson, Fabiola Butler Taylor, Asha B. Shereem, and Denise B. Collier, one nephew, Harold Butler, Jr., as well as host of great and great-great nieces, nephews, relatives and friends. She was preceded in death by her husband, the late Dr. Harold Lucien, her parents, the late Samuel and Sarah Irving Butler, three sisters, the late Felicia B. Shelly and husband, Alonzo, the late Eloise B. Marrero and husband, Lawrence, and the late Selina B. Tinson and husband, August; four brothers: the late Samuel Butler, the late Alton and his wife, Emily Butler, the late Oscar and Frances Butler and the late Harold and Martha Butler. The family cordially invites relatives and friends of the family, pastors, officers and members of all neighboring churches, Graduate chapter of Alpha Kappa Alpha Sorority ,Inc., the New Orleans Council on Aging, also President, Board of Trustees, Faculty, staff and student body of Dillard University, along with the Dillard University Professional Organization of Nurses (DUPON) to attend the Church visitation from 10:00 A.M. until 10:50 A.M., Saturday, December 18 at St. Paul’s Lutheran Church, 1625 Annette Street, New Orleans. Memorial service will begin promptly at 11:00 A.M., with entombment of cremains in the St. Louis Cemetery #2. In view of the large number of older relatives and friends expected, the family cordially requests that attendees have COVID-19 vaccinations and wear masks covering both nose and mouth throughout the services. In lieu of flowers, please consider a donation in honor of Rhea Butler Lucien to Dillard University to DUPON or Natural Sciences programs. Arrangements by D. W. Rhodes Funeral Home 3933 Washington Ave. Please visit www.rhodesfuneral.com to sign the online guestbook.

The family of Rhea Butler Lucien created this Life Tributes page to make it easy to share your memories.

Send flowers to the Lucien family.