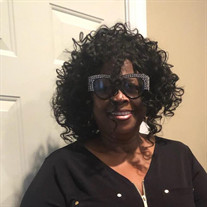 Martynetta “Netta” Taylor departed this life while at her home in Covington, Georgia on Friday, February 4, 2022, at the age of 67. She was born in New Orleans, Louisiana on March 9, 1954 to Russell and the late Hilda Crossley Taylor. Martynetta remained a lifelong resident of New Orleans until she relocated to Georgia following Hurricane Katrina in 2005. In recent years, most of her time was spent in New Orleans as she cared for her father. There were no words to describe her immense love for him. Her death was unexpected, which has left her father, family and friends heartbroken and with profound sadness. Her loving, generous, compassionate, and lively spirit will be embedded within us forever. Martynetta was educated in the Orleans Parish Public School System. She was a graduate of Alcee Fortier High School, class of 1972, and served as Fortier’s first African American class president. In 1978, she received a bachelor’s degree in education from Southern University in Baton Rouge, Louisiana. While at Southern University, she was initiated into Delta Sigma Theta Sorority, Incorporated. Martynetta exemplified the principles of Delta which are scholarship, public service, and sisterhood. After completing her undergraduate degree, she was a dedicated teacher for more than two decades. Over the years, she taught at the School for Exceptional Children in Houma, Louisiana and at the South Terrebonne High School. She flourished in Orleans Parish School System where she worked at McDonald # 19 School, Frederick Douglass High School and served as a Community Based Vocational Instructor for Orleans Parish. Little Woods Elementary School was her last place of employment in Orleans Parish. She enjoyed her teaching career and had a special love and bond for autistic children. Martynetta retired from Orleans Parish School System in 2005 when she relocated to Covington, Georgia. Netta was a friend and “sister” to many. She had many special friends along her life’s journey; and she made them all feel like a best friend. Sabrina Hawthorne and Yolanda Hartley were two loyal friends that stood out because they were always there when needed. Netta possessed wisdom throughout her sisterhood mission. She served as a marriage and guidance counselor and always provided everyone with the right words and the right answers. When Netta called, she would ask, “What’s happening?” Those she talked to would spill their guts as she listened intensely. She was available anytime of the morning or night by phone. She was a dear friend and her friends knew the information was going to be contained and not spread as gossip. Netta’s favorite pastimes were watching movies, listening to oldie but goodies while dancing in the chair, and communicating with friends. Dancing in the chair didn’t compare to her earlier years on the dance team when she served as Captain of Flag Twirlers in high school. Netta was late for everything. She arrived at a party four to five hours late, as though the party just started, but was always embraced because she was loved and everyone would be glad to see her. There was no need to get angry because it would happen over and over again. According to Netta, being late was a Taylor family trait. When she departed this life, she had no time to say that she was on her way. This time she was on time, God’s time. She didn’t have to worry about interviewing for another job because her work on earth was done. If we obey, God promises that He will watch over us, supply all of our needs and save us. Martynetta Taylor accepted Christ at an early age and displayed characteristics of a faithful servant. She showed empathy, selflessness, humility, loyalty, compassion and love as she cared for others. Whatever GOD gave to her, it multiplied in her hands to be able to give generously to others and giving to others was exactly what she did. Netta is home now and can take her rest. Martynetta was preceded in death by her mother Hilda Taylor, her brothers, Russell, Jr. and George Taylor, and sisters: Loretta, Roslyn, and Cheryl, grandparents, George E. Taylor and Eula Jackson and godparents, Sam and Teola “Marie” Jackson. She leaves to mourn her passing in her father, Russell Taylor, Sr., two children of her late sister Roslyn who God blessed her to be able to raise and cherish her wonderful memories, William Russell Sam Sr. and Kaylyn Taylor. They were her heart beat. An additional bundle of joy was William’s son, William Russell Sam Jr.. Also mourning her passing are brothers: Tyrone Taylor (Dolita) and Dyrin Larkin, sister: Tereska Taylor (Lionell), cherished god-brother Leo Hammond, and Freddie and Floyd Gibson lovingly considered as dearest lifelong friends. Martynetta is also survived by nephews: Russell Robinson (Rowena), Asa (Aisha), Anotche (Johnsell), nieces: Amy, Amber Brock (Philip), Ashley, Kendra , and Tyreone and a host of great nephews and nieces: Russell IV, Rashad, Ryan, Rhia, Asia, JaRon, Mykelti, Aniaija, Anotche Jr., Auron, Nigel, Barras, Makhia, Aaliyah, Aalila, Messiah, Aisha, Greg, Trenise, Keith, Daniel, DeAngel, Aniyah, Gregory Gia, and a host of cousins, family and friends who loved her dearly and will miss her million dollar smile. Relatives and friends of the family are invited to attend a Funeral Service at D.W. Rhodes Funeral Home, 3933 Washington Avenue on Friday, February 18, 2022 at 1:00 pm. Visitation will begin at 12:00 pm. Attendance is limited and everyone is required to adhere to all restrictions. You must wear a face mask at all times and practice social distancing. Interment: Mt. Olivet Cemetery. Arrangements by D.W. Rhodes Funeral Home, New Orleans, LA. Please visit www.rhodesfuneral.ocm to sign the guestbook.

Martynetta &#8220;Netta&#8221; Taylor departed this life while at her home in Covington, Georgia on Friday, February 4, 2022, at the age of 67. She was born in New Orleans, Louisiana on March 9, 1954 to Russell and the late Hilda Crossley Taylor.... View Obituary & Service Information

The family of Martynetta Taylor created this Life Tributes page to make it easy to share your memories.

Martynetta “Netta” Taylor departed this life while at her home...

Send flowers to the Taylor family.