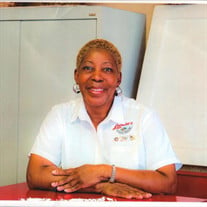 Loretta S. Harrison passed away peacefully surrounded by family and friends on Wednesday, February 16, 2022, following a battle with breast cancer. She was 66. Loretta, lovingly referred to as the" Praline Queen," was the chef and owner of the historic Loretta's Authentic Pralines, becoming the first African-American woman to own and operate a praline company in New Orleans. She made friends and admirers worldwide through her shop and her long-standing record as a food vendor at the city's biggest festivals, starting with the New Orleans Jazz & Heritage Festival. Loretta was a faithful steward of God with the belief that if you "put God first, He will grant the wishes of your heart." She shared her unwavering love and dedication for God and the city of New Orleans with everyone she encountered. She was a woman with incredible grace and moral fortitude and was a guiding light who lit up our lives with infinite love. Loretta grew up in Verrett, LA, one of 12 children. Her mother made pralines after church for family and guests visiting their home. By age 8, Loretta was cooking them alongside her mom, using a recipe that went back to her great grandmother. After graduating from Southern University at New Orleans, she went to work at the LSU Medical Library, where she sold pralines to students on the side. In 1978 her big break came when she heard that the Jazz & Heritage Festival put out the call for a praline vendor. She won the contract, sold 1,500 pralines in two weekends, and continued to supply the festival for over 40 years. The success inspired her to leave her job and develop her business full time. Unfortunately, success did not come without a few failures along the way. Yet, she believed in her product and herself. By 1983, she opened her first shop in Jax Brewery. Later, she moved to the French Market, and in the 1990s, by the grace of God, she opened a second, much larger shop and production kitchen in Faubourg Marigny that serves gumbo, seafood platters, stuffed peppers, and calas, as well as pie, cookies, and king cake. She was a proud entrepreneur who advocated for local business owners, cultural and culinary arts. After Hurricane Katrina, she quickly returned to the city meeting with national and local officials to voice small business owners' needs. During this difficult time, her business was buoyed by her steadfast belief that anything which can be destroyed can be rebuilt. She took immediate action, changing her business model to include an online storefront and becoming a restaurant for reporters, emergency workers, and volunteers rebuilding the city. She added plate lunches and dishes like gumbo, figuring people needed a place to grab a meal more than sweets. She would continue to evolve her menu and creations. She added praline filling to traditional beignets and even made beignets into sandwiches filled with crab cakes, eggs and bacon, and hamburger patties. She was a faithful member of Franklin Avenue Baptist Church. She is survived by her children, Robert Harrison, III (Ashley), Roddrick Harrison (La’Tekqua), and Kendrick Hills-Harrison; sisters J'Net Warren, Greta S. Tate, and Cynthia S. Villavaso (Lloyd); brothers Clevland Warren (Paulette), George, Hollis, Jasper, and Edward Shaw; two grandchildren Robert (IV) and Avery Harrison; three godchildren, Latasha Tate Tillman, Kendell Williams and Samaria Gallien; and a host of nieces, nephews, and friends. She was preceded in death by her parents Loretta Louise and George W. Shaw, Sr.; brothers Murdis Arnold and Kester Shaw and her sister Glenda Hills. Although she is no longer here with us in this realm, her beautiful soul will continue to guide and inspire us all. Relatives and friends of the family, pastors, officers and members of Franklin Avenue Baptist Church, Willie Chapel Primitive Baptist Church, First Baptist Church of Verrett, LA and Second Zion Baptist Church, also, employees of Loretta’s Authentic Pralines, Helen Cox High School, Hampton & Harrison Attorneys at Law, New Orleans Fire Department, Hancock Whitney Bank, Tulane Medical Center, Greta’s Beauty Salon, First City Court Section B, Villavaso Investment, Enhanced Capital, Brooklyn Academy of Music and Saint & Essex PR, Municipal & Traffic Court of New Orleans Division C, New Orleans Juvenile Court, New Orleans Jazz & Heritage Foundation, French Market Corporation, Domino Sugar of Chalmette, LA and Ochsner Medical Center are all invited to attend the Memorial Service at Franklin Avenue Baptist Church, 8200 I-10 Service Road on Friday, February 25, 2022 at 10:00 am. Visitation will begin at 8:00 am. Livestream set to begin at 10:00 am by visiting www.franklinabc.com or facebook.com/FABCNOLA or youtube.com/FABCNOLA. Everyone in attendance must wear a mask. Interment will be private. In lieu of flowers, the family asks that you make a donation to St. Jude Children’s Research Hospital: Loretta S. Harrison Memorial Fund at http://giftfunds.stjude.org/lorettaharrison_godisgood or Louisiana SPCA: note in Memory of Loretta S. Harrison at www.louisianaspca.org/. Arrangements by D.W. Rhodes Funeral Home, 3933 Washington Avenue. Please visit www.rhodesfuneral.com to sign the guestbook.

Loretta S. Harrison passed away peacefully surrounded by family and friends on Wednesday, February 16, 2022, following a battle with breast cancer. She was 66. Loretta, lovingly referred to as the" Praline Queen," was the chef and owner of the... View Obituary & Service Information

The family of Loretta Shaw Harrison created this Life Tributes page to make it easy to share your memories.

Send flowers to the Harrison family.