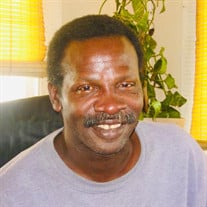 Lance David Lewis, age 64, was born on November 30, 1957, in New Orleans, Louisiana to Edward Arthur Lewis and Helen Ossie Williams Lewis. He attended Our Lady of Lourdes and Holy Ghost catholic elementary schools. He graduated from Walter L. Cohen High School in 1976, where his graduating class voted him as a superlative – “Most Witty.” As a matter of fact – that was spot on – Lance was always at the ready with a humorous quip. Even a week before his death, he made a visitor laugh. While in Touro Hospital in January, he told his sister, when his favorite nurse walked into the room, “meet your sister-in-law.” Lance missed his calling; he could have been a comedian or comedy writer. In high school he was well liked and got along with a wide variety of student groups. One of his classmates, when asking about how he was doing several years after high school graduation, stated, “I thought he would have been a lawyer!” He had over 3000 Facebook friends and several people missed him when he disappeared from Facebook in September after the stroke. A true New Orleanian, he truly embraced the saying “let the good times roll.” His pride and joy was the Honda motorcycle he had for several years in his twenties; he was always happy to take someone for a ride through the city. He lived his life with joie-de-vivre and did not seem deterred by the possibility of negative consequences. Lance had a number of skills that were not fully expressed because to pursue them would have interfered with his love of life. His longest job was working as an independent painter contractor for a family-owned hotel business in the French Quarter. The family owned several properties and Lance was among the crew that kept them in tip-top shape. He lived at his address for 30 years and his neighbors were unanimous in mentioning how helpful he was whenever they were having computer problems or working on a carpentry projects or repairing their cars. His father taught him to work on cars, but his other skills were largely self-taught. Lance loved to tinker with things – he had a ton of tools! And although he had no children, he always loved animals and provided a home for several cats over the years. When he was in rehab after his stroke, he said, “When I get out of here, I’m going to get a calico kitten.” He is survived by his sister, Debra Maria Lewis, PhD, of Atlanta, Georgia, godson, Jamall Anthony Patterson of Atlanta, Georgia and a host of cousins, friends and loved ones. Relatives and friends of the family are invited to attend a Mass of Christian Burial at St. Rita Catholic Church, 2729 Lowerline Street on Friday, March 18, 2022 at 11:00 am. Visitation will begin at 10:00 am. Interment: Providence Park Cemetery. Arrangements by D.W. Rhodes Funeral Home, 3933 Washington Avenue. Please visit www.rhodesfuneral.com to sign the guestbook.

The family of Lance David Lewis created this Life Tributes page to make it easy to share your memories.

Send flowers to the Lewis family.