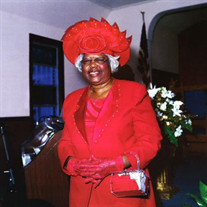 I have finished my course, I have kept the faith: Henceforth there is laid up for me a crown of for I am now ready to be offered, and the time of my departure is at hand. I have fought a good fight righteousness, which the Lord, the righteous judge, shall give me at that day: and not to me only, but t unto all them also that love his appearing. II TIMOTHY 4, 6-8 On Sunday, February 9, 1936 in Mansfield, Louisiana proud parents The Late Auther Mickle and the Late Birder Johnson. Mickle welcome their oldest daughter Evleana Mickle. On Wednesday, January 26, 2022 Evleana Heavenly Father gave her new birth to eternal life and said Servant well done its time to come home job well done. Evleana accepted Christ as her personal savior at a young age here on earth. She was educated in Desoto Parish School System in Shreveport, LA. After graduating from Carver High in Shreveport she continued her education at Grambling State University where she received her Bachelor of Science Degree in Education. She continued her education journey by receiving her Master Degree in Education from the University of Southern California. Evleana always believed in working hard and learning all she could too better herself on all levels. After receiving both Bachelor and Masters Degrees she also earned 30 plus hours from Louisiana State University of Shreveport. She became an Elementary School Teacher and taught for over 30 ½ years, and because of her hard work and knowledge was awarded Outstanding Teacher of America. After retiring from the school system Evleana continue her gift of teaching, and mentoring to children and adults on levels of education and life experiences. Evleana may have been teaching and mentoring in so many areas but on December 2, 1966 she became a mother to a baby girl she named LaSonji Melita Davis who stole her heart at first sight. While attending her cousin funeral Evleana met her soul mate for life Reverend Dr. Rufus Bonds and they married in December 1985, and from that union she gained another daughter and son-in-law Gail Bonds-Wells and Charles Wells. Evleana also became a grandmother too Bianka Wells-Joshua and her husband Richard Joshua. After moving to New Orleans she became a member of Metropolitan Baptist Church where her husband, Dr. Rufus Bonds, was the pastor. It didn’t take long for Evleana to put her God given talents to work. In her church she served as President of the Senior Mission, Sunday School Teacher, Deaconess and Young People’s Department Counselor, she was also Founder of the Scholarship Fund. She was active with the First District Missionary Baptist Association, having served many years as an instructor in the Congress of Christian Education and as a member of the First District Chorus. She served as Past President of the Ministers’ Wives and Widows and Director of the Women’s Auxiliary-Prison Ministry. She was an instructor in the Louisiana Baptist State Convention Congress of Christian Education for 28 years. In 2011, she was appointed Director of the Children’s Division of the Louisiana Baptist State Convention. Evleana is a past Matron of Dorcas Chapter #53 OES, PHA; she was named Matron of the Year District 1 Order of Easter Stars, Esther Grand Chapter, Prince Hall Affiliation, in August of 2000. She is also a member of Epsilon Sigma Gamma Rho Sorority. Mrs. Bonds along with her husband has traveled across five continents, received numerous awards over the years, but her greatest accomplishment was accepting Jesus as her Lord and Savior! Though her health slowed her down and she was unable to go out anymore she worked from home because someone was always calling and dropping by for advice and directions on life situations. She always had an answer it may not be what you wanted to hear but she was going to give it to straight but from the heart. If you knew her you know that’s a true statement. With failing health issues and some major heart breaks from losing her husband, daughter, and sister all within one year, she tried to continued her walk with God but he saw her suffering and on Wednesday, January 26, 2022 he called her home where there is no more suffering and heart breaks. Evleana Mickle Bonds was preceded in death by her husband The Late Reverend Dr. Rufus Bonds, her daughter The Late LaSonji Melita Davis, her parents father The Late Auther Mickle, mother The Late Birder Mickle, and sister The Late Gussie Mickle Hayes. She leaves to cherish her memory daughter Gail Bonds-Wells, Son-in-law Charles Wells, granddaughter Bianka Wells-Joshua, grand son-in-law Richard Joshua, sister Mary Gibbs of Lynwood, CA, God-son Clifford Clay, Jr., close family friends Marlin U. Youngblood, and Janice Edward Brown and a host of family and friends. Family and Friends Are Invited to Attend the Funeral Services New Orleans, LA Viewing 3 Post Meridiem Until Service Time Friday, January 4, 2022 ~ 4 Post Meridiem Pentecost Baptist Church ~ 1510 Harrison Avenue ~ New Orleans, LA 70122 Reverend Lionel Davis, Sr. Host Pastor Reverend Rodney P. Baptiste Officiating Shreveport, LA Viewing 10 Ante Meridiem Until Service Time Saturday, February 5, 2022 ~ 12 Post Meridiem Unity of Faith Baptist ~ 272 East 78th Street ~ Shreveport, LA 71106 Reverend Terrance Toney, Sr. Host Pastor Reverend Rodney P. Baptiste, Officiating Interment Carver Memorial Cemetery 498 Kennie Road ~ Shreveport, LA Services Entrusted To: D. W. Rhodes Funeral Home 3933 Washington Avenue ~ New Orleans, LA 70125 Please visit www.rhodesfuneral.com to sign the guestbook.

I have finished my course, I have kept the faith: Henceforth there is laid up for me a crown of for I am now ready to be offered, and the time of my departure is at hand. I have fought a good fight righteousness, which the Lord, the righteous... View Obituary & Service Information

The family of Evleana Bonds created this Life Tributes page to make it easy to share your memories.

I have finished my course, I have kept the faith: Henceforth...

Send flowers to the Bonds family.