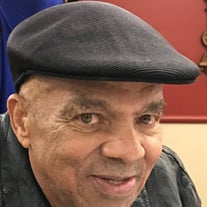 Edward Francis Mitchell entered eternal life on Thursday, February 3, 2022, at the age of 78 at Ochsner Hospital on Jefferson, Hwy. Ed as he was fondly called by some and Mitch to others, was born on July 6, 1943, in New Orleans, LA, to the union of the late Clarence J. Mitchell, Sr. of Vacherie, LA and the late Helena Batiste Mitchell of Thibodeaux, LA. Edward was a member of Blessed Sacrament Catholic Church. He attended Xavier University Preparatory School and graduated from St. Augustine High School in 1961. He spent most of his career in the commercial transportation industry where he enjoyed greeting and meeting new people every day in his role as one of the first black Streetcar Conductors in New Orleans. He enjoyed playing baseball, watching professional football, especially the New Orleans Saints. He could be found at the Fairgrounds Racetrack during opening season. He loved horse racing. Ed was full of life, enjoyed making people laugh and he never met a stranger. As he journeyed through life, he met his first love and former spouse, the late, Darlene Mitchell. Through this union, he was the loving father of Cora Balbosa (David) of Jonesboro, GA, Therese Badon (Austin) of New Orleans, LA, adoptive father of Blandon Mitchell (Tracey) and Eban Mitchell of New Orleans, LA. After his divorce, he met Gladys Parker, and became the loving father of Edward Parker, Sr. of Baton Rouge, LA. Ed’s love for his family is immanent through the beautiful bond of his blended family. Brother of the late Clarence J. Mitchell, Jr. and the late John O. Mitchell. Brother-in-law of Catherine S. Mitchell and the late Marjorie J. Mitchell. Devoted grandfather of Tiffany, Natalie, Donnell, Ayden, Edward, Jr., Jamil, Chase, Chanen, Kayla, Darrien, Tavion, Terry and Terrence. Great-grandfather of Isaiah, Rashad, Alexis, Hannah, Montana and Damir. He is also survived by a host of nieces, nephews, cousins, other relatives and friends. As Ed began to suffer from vascular disease and a few other health ailments, it became clear that he needed assisted living. He began the next chapter of his life in 2012 at Chateau De Notre Dame nursing facility where he developed many long-lasting friendships with staff and residents. Many on staff at Chateau fondly called him “Money Mitch”. It was confusing to the family initially, as to why staff would refer to our dad as “Money Mitch”, but we have since found out that dad would treat the staff person that brought him his desired meal when the staff ventured out for lunch. Dad got enjoyment out of treating others. Those of you who knew dad fondly, knew that he rarely stepped out without his kangol. Kangol hats became dad’s signature look. Dad didn’t go anywhere without his kangol! Relatives and friends of the family, priest and parishioners of St. Peter Claver Catholic Church, also staff of Chateau De Notre Dame, staff of Fresenius Kidney Care, UNCF, The LINKS, Inc., Delta Sigma Theta Sorority, Inc., King George Grand Lodge and Queen Vashti Grand Chapter are invited to attend the service at Blessed Sacrament-St. Joan of Arc located at 8321 Burthe Street, New Orleans, LA on Saturday, February 12, 2022 at 10:00 am. Visitation 9:00 am - 9:45 am. Attendance is limited and masks are required. Internment immediately following at: St. Patrick Cemetery #3 Section: St. Patrick’s Mausoleum, 143 City Park Avenue, New Orleans, LA. Arrangements by D.W. Rhodes Funeral Home, 3933 Washington Avenue. Please visit www.rhodesfuneral.com to sign the guestbook.

Edward Francis Mitchell entered eternal life on Thursday, February 3, 2022, at the age of 78 at Ochsner Hospital on Jefferson, Hwy. Ed as he was fondly called by some and Mitch to others, was born on July 6, 1943, in New Orleans, LA, to the... View Obituary & Service Information

The family of Edward Francis Mitchell created this Life Tributes page to make it easy to share your memories.

Send flowers to the Mitchell family.