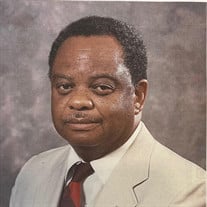 On the morning of February 22, 2022, Earl Wright Sr., affectionately called "Paw Paw" by his grandchildren, was called home by the Lord at the age of eighty-four. Mr. Wright was born to the union of Richard Wright and Marguerite Elizabeth Kimble Wright on August 9, 1937, in New Orleans, LA. He graduated from Joseph S. Clark High School. He earned a B.S. in secondary education from Southern University, a B.A. in journalism from Loyola University, and a M.Ed. in guidance and counseling from Loyola University. He also served four years in the U.S. Army and was honorably discharged as a Captain. Mr. Wright served as the Director of Public Relations at Southern University at New Orleans. He was the head of the Jefferson Parish Community Action Program for over 25 years. He was a member of the Jefferson Parish Employees Federal Credit Union Board of Directors. He was also a member of the Masons Mt. Olive Lodge No. 21. Mr. Wright not only dedicated his life to his children and wife, but also provided for and supported his brother and assisted with the educational endeavors of his nieces and nephews. He unselfishly gave to those whether it was housing, clothing, food, or advice. He would always lend a helping hand to his fellow man. He is preceded in death by his parents Richard and Marguerite Wright, his brother Clifford Butler and his great-grandson Darnell Simmons and a host of other relatives. Those who remain to cherish his memory are his wife, Rose P. Wright, his daughters, Shelia Daunoy, Sandra (Thomas) Brown, Angela (Frederick) Johnson, III, and son Earl (Marilyn) Wright II; his siblings Vandy Wright and Geraldine Butler Lomax; his grandchildren LaTisha Simmons, Arianne Lee, Arthur Lee, III, Sasha Johnson, Amonie Johnson, Frederick (Monecia) Johnson, IV, Zenobia Johnson, Earl Wright, III, Brandon Wright and Trey Wright; and great-grandchildren Jamal Simmons, Sahir Washington, Amari Jackson, Addisyn Lee, and Brielle Wright. He is dearly missed by his family, church, and friends. His memory will forever live in the hearts and minds of those who knew and loved him. Relatives and friends of the family are invited to attend a Celebration of Life Service at 10:00 AM on Saturday, March 5, 2022, at New Zion Baptist Church, 2319 Third St., New Orleans, LA 70113. Visitation will begin at 9:00 AM. Internment: Mt. Olivet Cemetery and Mausoleums, New Orleans, LA. Due to CDC (COVID-19) restrictions mask and social distancing are required. Arrangements entrusted to D.W. Rhodes Funeral Home, 3933 Washington Ave., New Orleans, LA. To sign the guest book on line please visit www.rhodesfuneral.com

On the morning of February 22, 2022, Earl Wright Sr., affectionately called "Paw Paw" by his grandchildren, was called home by the Lord at the age of eighty-four. Mr. Wright was born to the union of Richard Wright and Marguerite Elizabeth Kimble... View Obituary & Service Information

The family of Earl Wright Sr created this Life Tributes page to make it easy to share your memories.

Send flowers to the Wright family.