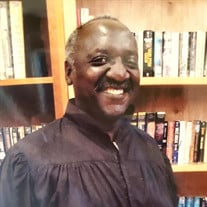 On March 4, 2022, Douglas Paul Sumner was released from his earthly assignment and made his journey home. He passed away peacefully in his home at the age of 62 years old. Douglas or Paul, as everyone knew him, was born on April 27, 1960, in New Orleans, LA at Charity Hospital to the late Ernestine White Sumner. Paul was raised in Gretna, La, and was baptized at Regular Baptist church. He was also schooled in the Jefferson Parish school system, where he graduated from West Jefferson High School. He then entered into the military in July of 1974 and served in the United States Army. He served for many years, working as an Equipment Records and Parts Specialist, residing in Germany before exiting in October of 1984. Upon his exit from the military, he worked as a mechanic and also a semi truck driver, doing what he loved. Paul was known for his height, bright smile, charismatic attitude, and always loving to have a good time. Paul was the proud father of three children. His oldest daughter Stephanie (who resides in Germany) Waun'Paul, Edmond (Edna) and one grandson Emon, whom he loved dearly. He leaves to cherish his memory, two sisters; Vanessa Sumner Custard, Angela Murray (Henry) three brothers; Van 'Jim' Sumner Jr., Andrew 'AJ' Sumner Sr., Dwayne Michael Sumner, two aunts, Thelma White Triggs, Lillain White Grey, one uncle, Douglas White, and a host of nieces, nephews, cousins, and friends. Paul proceeded in death by his parents Ernestine Sumner, and 'Slim', two brothers, Arthur Joseph Sumner and Timothy Warren Sumner, 1 uncle, Eddie White Sr, and 1 aunt, Claudie White. "Grieve not, nor speak of me with tears But laugh and talk of me as if I were beside you. 'Twas heaven to be here with you." -Isla Pascal Richardson. Relatives and friends of the family are invited to attend a Funeral Service at D.W. Rhodes Funeral Home, 1020 Virgil Street Gretna, LA on Saturday, March 19, 2022 at 10:00 am. Visitation will begin at 9:00 am. Interment: New Hope Baptist Church Cemetery, Gretna, LA. Arrangements by D.W. Rhodes Funeral home, Gretna, LA. Please visit www.rhodesfuneral.com to sign the guestbook.

On March 4, 2022, Douglas Paul Sumner was released from his earthly assignment and made his journey home. He passed away peacefully in his home at the age of 62 years old. Douglas or Paul, as everyone knew him, was born on April... View Obituary & Service Information

The family of Douglas Paul Sumner created this Life Tributes page to make it easy to share your memories.

On March 4, 2022, Douglas Paul Sumner was released from his earthly...

Send flowers to the Sumner family.