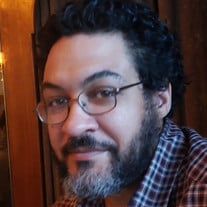 Dirk Russell Miranda died on Sunday January 9, 2022. Dirk was born on November 21, 1982 to his parents Opal and David Miranda and was their only child, although Dirk had three older siblings through his father. As the baby of the family, Dirk was spoiled by us all. He was born in New York City, New York at Mount Sinai Hospital. He lived in Brooklyn, New York, until his parents’ separation. Dirk and his Mom moved to New Orleans in the early nineties. He attended St Francis Cabrini Elementary and from there went to McMain High School. During his teenage years he was a proud member of the hockey team CCHL Canadiens where he played defence. He and his friends formed a rock band, making much noise in the neighborhood. He loved music and he and his best friend, Shamari wrote as he reminded me, “bad rap songs.” He attended Howard University in Washington DC, and transferred to Florida International University in Miami to be close to his siblings. In 2005, at about the time of Katrina, Dirk started suffering from symptoms of what would end up being severe and debilitating mental illness. He sought refuse in the outdoors in his beloved Florida. He became clever at living off his wits and honed survival skills which kept him safe. His mother made several futile attempts to bring him home during this time. He finally returned home and received treatment for his illness in 2018. He became the caregiver for his beloved grandmother fixing her meals and entertaining her with his DJ music. Dirk will be remembered particularly for his kindness. While driving along, after our frequent bad weather days, he would stop and move to the side any debris in the road so other drivers would not get hurt. He was kind to the homeless, and kind to all animals. He was especially kind to his grandmother who he cared for with love despite sometimes trying times. Dirk’s passions were hockey and music and he joined an adult hockey team in Lafayette upon his return home. Dirk leaves behind his loved ones to mourn including his mother, Opal Russell Walker, stepfather (Dr. George Walker), His Dad David Miranda of Miami. His Aunt Dawn Russell, siblings David Miranda Jr.(Wendy), Duane Miranda (Guliana), Christine Miranda (Derek ) all of Miami. His aunt Dawn Russell of Brooklyn NY, stepsiblings Stanley Walker (Natasha), Elizabeth Walker Trimiew (Alonzo) of Atlanta. Cousins Malik Russell (Kristin) Brooklyn, and Earamichia Brown of McKinney. Grandmother Blanche Russell of New Orleans. Also a host of of other friends and family. Due to Covid 19 restrictions everyone in attendance must wear a face mask and practice social distancing. A funeral service will be held at DW Rhodes Funeral Home 3933 Washington Ave on Wednesday January 19th at 1pm. Visitation is from 11am to 1pm. Online guestbook is at www.rhodesfuneral.com.

Dirk Russell Miranda died on Sunday January 9, 2022. Dirk was born on November 21, 1982 to his parents Opal and David Miranda and was their only child, although Dirk had three older siblings through his father. As the baby of the family, Dirk... View Obituary & Service Information

The family of Dirk Russell Miranda created this Life Tributes page to make it easy to share your memories.

Send flowers to the Miranda family.