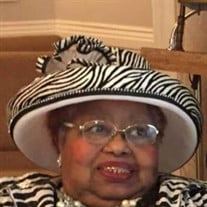 Demaries Coleman Penn was born July 30, 1931 in New Orleans, La to the late Penney and Anna Taylor Coleman. On December 20, 2021, Demaries was called home from labor to reward. She was united in Holy Matrimony on July 17, 1946 to the late... View Obituary & Service Information

The family of Demaries Coleman Penn created this Life Tributes page to make it easy to share your memories.

Send flowers to the Penn family.