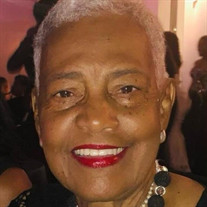 Beverly Ann Roussell Gilmore was born January 21, 1946, in New Orleans, LA, and departed this life on Monday, October 18, 2021. She was the daughter of the union between the late August J. Roussell, Sr. and Irma Barre Roussell. Beverly was a lifelong member of St. Joan of Arc Catholic Church, where she had her First Communion and Confirmation. Beverly attended St. Joan of Arc Elementary School and St. Mary’s Academy, where she graduated in the class of 1963. She then furthered her education by enrolling in Dillard University where she met the love of her life, Robbie Eddis Gilmore. Beverly and Robbie were married on September 25, 1965, and the two remained devoted to each other and their family for forty years before Robbie’s death in 2006. From their union, they had two sons, Brent Stephen and Chad Anthony. Beverly was a dedicated and loving wife, mother, and grandmother. She thoroughly enjoyed life to the fullest and had a love of traveling with family and friends, both domestically and internationally. Beverly truly was a N’awlins girl and was always ready to talk about the city to anyone who would listen. She was also an outstanding cook, and many can attest to that fact. She especially loved to entertain those who came into town or those who just stopped by her house just to say hello. Beverly worked as a clerical worker at South Central Bell, now AT&T, and retired after 25+ years of service. During her time at the company, she gained many friendships that lasted throughout her lifetime. After her retirement, some of her pastimes were sitting on her porch, going to Langenstein’s grocery store, watching The Price Is Right (like her mother), Twilight Zone, Alfred Hitchcock movies, CNN (all day it seemed), and various reality TV shows. She also kept abreast of the news of the day and was always ready to discuss politics. Above all else, she truly enjoyed people, especially spending time with her family and friends. Beverly was preceded in death by her parents, August and Irma Roussell, husband Robbie E Gilmore and brother, August Roussell, Jr. She leaves to cherish her memory: sons, Brent (Elisa) Gilmore and Chad (Sherry) Gilmore; grandchildren, Monet, Matisse and Zaire Gilmore; brother, Sidney (Merri) Roussell; Brother-in-laws Nolan (Jean) Gilmore and Clarence (Adrian) Wilson; Sister-in-laws, Janis Roussell, Arvia Gilmore; Denise (Larry) Scott; Nauweta Gilmore and a host of nieces, nephews, cousins, other relatives and friends. Service will be held on Thursday, October 28, 2021 at: St. Joan of Arc Catholic Church 8321 Burthe Street New Orleans, LA 70118 Viewing begins at 10:00AM and Service begins at 11:00AM NOTE: MASKS WILL BE REQUIRED Arrangements by D. W. Rhodes Funeral Home 3933 Washington Ave. Please visit www.rhodesfuneral.com to sign the online guestbook.

Beverly Ann Roussell Gilmore was born January 21, 1946, in New Orleans, LA, and departed this life on Monday, October 18, 2021. She was the daughter of the union between the late August J. Roussell, Sr. and Irma Barre Roussell. Beverly was a... View Obituary & Service Information

The family of Beverly Ann Roussell Gilmore created this Life Tributes page to make it easy to share your memories.