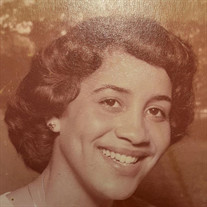 Angela Maria Hayes Francis was born on November 30, 1959 to the late Noel and Laura Hayes in New Orleans, Louisiana. An only child and the apple of her parents’ eyes, Angela was raised on Allen Street in the Gentilly section of New Orleans, Louisiana. As a child, Angela often spent summers in Franklin, Louisiana with her grandparents where she was fondly remembered as a sweet, shy little girl with a dimpled smile that could light up any room. Angela attended Gentilly Terrace Elementary School, Gregory Junior High School and John F. Kennedy Senior High School, where she was a class treasurer and participated in the school choir before graduating as a proud member of the Class of 1977. After her high school graduation, Angela remained in New Orleans and attended Xavier University of Louisiana, where she received her Bachelor’s Degree in Elementary Education and her Master’s Degree of Education in Education Administration from the University of New Orleans. It was her love of learning and children that inspired her to pursue a career as a an educator — one who would elicit smiles every morning as she poked her head in classrooms to wish her students a wonderful day. Weather permitting, Angela allowed school announcements to be made outside. She used this time to form lasting memories with her students such as having the cheerleaders perform or encouraging teachers to lead the entire school in the Macarena, which was a wildly popular dance at the time. Over the course of her career, Angela was the Principal of Resurrection of Our Lord Catholic School and St. Monica Catholic School. She was also the Principal at Carson Elementary and Program Manager for math and reading for Denver Public Schools. As an administrator, Angela was known as an inclusive leader who encouraged and insisted upon participation from everyone, while always providing resources to keep her staff motivated and successful. In 1984, Angela married fellow New Orleans native David Francis and moved to Denver, Colorado. Their union brought forth three beautiful children Jasmine Nicole, Devin Hayes and Miles Macdonald. She gave birth to their firstborn, Jasmine, in 1992. After the birth of Devin in 1994, the Francis’ decided to return home to New Orleans where Miles was born in 1998. After 19 years of marriage, Angela and David divorced and Angela relocated to St. Louis, Missouri, where she lived until she succumbed to a long-time battle with cancer. A parishioner of Blessed Teresa of Calcutta Catholic Church in Ferguson, MO, Angela was predeceased by her parents. She will be forever remembered by her children Jasmine, Devin and Miles and a host of family, friends and loved ones. A Mass of Christian Burial will be held Saturday, December 4, 2021 at Xavier University Chapel, 1 Drexel Drive at 10:00 am. Visitation will begin at 9:00 am with interment immediately following at Sacred Heart Cemetery in Baldwin, LA. In lieu of flowers, the family requests donations in honor of Angela Hayes Francis and Laura Delasbour Hayes to the American Cancer Society (New Orleans) P.O. Box 83930, Baton Rouge, LA 70884. Arrangements by D.W. Rhodes Funeral Home, 3933 Washington Avenue. Please visit www.rhodesfuneral.com to sign the guestbook.

Angela Maria Hayes Francis was born on November 30, 1959 to the late Noel and Laura Hayes in New Orleans, Louisiana. An only child and the apple of her parents&#8217; eyes, Angela was raised on Allen Street in the Gentilly section of New Orleans,... View Obituary & Service Information

The family of Angela Maria Hayes Francis created this Life Tributes page to make it easy to share your memories.