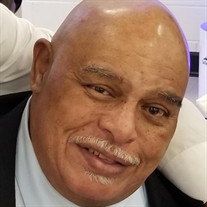 On December 24, 2021, an angel of the Lord descended from heaven and carried Andrew’s soul to rest, until the day when God shall call each of us to receive that Heavenly reward promised to those who have kept the faith. Andrew was born on September 7, 1945 in New Orleans, Louisiana to the late Andrew and Lydia Gooden. He was baptized in his early years at St. John Baptiste Church and later moved his membership to New Macadonia Missionary Baptist Church. Andrew joined the Navy in 1964 where he acquired his high school diploma. He was united in holy matrimony to Melissa Lewis on January 22, 1969. Andrew had several occupations. He was a bus and truck driver, Janitor, Security Guard and owned/operated a Private Eye business. He was the true example of the saying “jack of all trades and master of none”. Andrew was always the life of the party. He enjoyed spending time with family, dancing, cooking, eating and most of all playing dominoes with the crew while lying about his many experiences. Andrew’s favorite quote was “everybody wants go to heaven, but nobody wants to die”. To know Andrew was to love him. Those left behind to continue Andrew’s legacy and cherish his precious memories include: his wife of 53 years, Melissa Lewis Gooden; his children, Andrea Trenice Gooden-Conley (Mark); Lydia Ann Gooden; Felicia McDermott Anderson (Michael); eight grandchildren, Micah Z. Anderson; Mark A. Conley II; Mekhi A. Conley; Tatiana N. Conley; Andrew Gooden III; Eric T. Gooden II; Ronald J. Scott III; Arielle C. White; his brothers, Roland Gooden, Sr.; Bobby Dawn Gooden; Ronnie Gooden, Sr (Deborah); his God sister, Rosa Scott; his Godchildren, Steven Comeger; Alysia Gooden; Meriah Carter-Gooden; Patricia McCaleb; Darielle Richard; along with a host of aunts, uncles, nieces, nephews, relatives and friends. He was preceded in death by his parents, Andrew Sr. and Lydia Gooden; his son, Eric Tyrone Gooden Sr.; his Maternal grandparents, Willie Veal Sr. and Martha Jackson, his Paternal grandparents, John & Georgiana Gooden, Lydian and Mitchell Shepard; his God daughter, Loraine Pepp; his Special uncle, Johnnie Gooden. Relatives and friends of the family are invited to attend a Funeral Service at St. John Baptist Church, 8540 Panola Street on Saturday, January 8, 2022 at 11:00 am. Visitation will begin at 10:00 am. Masks are mandatory and will be enforced!!! Services will be livestreamed on Lydia Gooden Facebook page. Interment: Providence Memorial Park Cemetery. Arrangements by D.W. Rhodes Funeral Home, 3933 Washington Avenue. Please visit www.rhodesfuneral.com to sign the guestbook.

On December 24, 2021, an angel of the Lord descended from heaven and carried Andrew&#8217;s soul to rest, until the day when God shall call each of us to receive that Heavenly reward promised to those who have kept the faith. Andrew was born... View Obituary & Service Information

The family of Andrew Gooden created this Life Tributes page to make it easy to share your memories.

Send flowers to the Gooden family.